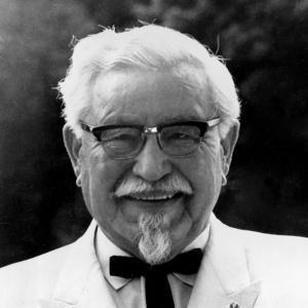 Not sure if you eat much KFC or not, but this story of Colonel Harland Sanders is pretty awesome. This story is inspirational because it's an example of how perseverance, dedication, and ambition along with hard work can create success; regardless your age.

Harland Sanders was born September 9, 1890 near Henryville, Indiana. His father died when he was 6 years old, leaving him the man of the house with a mother and two younger siblings; a brother and a sister. He picked up the art of good cooking very quickly and mastered many dishes by the age of 7. During his early years, He worked different odd jobs such as farm-hand, streetcar conductor, soldier, fireman, self-taught lawyer, insurance salesman, and steamboat operator.

At the age of 40, he was cooking for travelers out of his service station. His cooking fame spread and soon there were huge lines for his food. Sanders then moved across the street to a motel/restaurant to service the high demand. During this time, Sanders had also been tinkering with his special herbs and spices to make the perfect fried chicken.

During his search to make the perfect chicken, he was approached by a pressure cooker salesman who convinced Sanders to invest in this product to quicken his cooking process. He ended up investing in 12 pressure cookers. And somewhere around this same time, Sanders also ended up reaching his trademark 11 herbs and spices.

Some say that his 11th secret herb/spice was nothing more than regular sea salt but whatever it was, it worked and sold a lot of chicken. In 1935, Sanders was made into an honorary Colonel by the governor of Kentucky for his cooking skills.

Fast forwarding to 1950 the Colonel was 60 years old and has to shut down his restaurant business because a new highway was being built where his restaurant was located. Colonel Sanders decided to retire and lived off of $105 in the form of social security checks. Not wanting to accept this as his fate, he decided to franchise his chicken at the age ripe of 65.

He started travelling by car to different restaurants and cooked his fried chicken on the spot for restaurant owners. If the owner liked the chicken, they would enter into a handshake agreement to sell the Colonel's chicken. Legend has it that Colonel Sanders heard 1009 "no's" before he heard his first "yes".

Not sure if you heard me so let me repeat that.

He was turned down one-thousand and nine times before his chicken was accepted the first time!

The deal was that for each piece of chicken the restaurant sold, Sanders would receive a nickel. The restaurant would receive packets of Colonel's secret herbs and spices in order to avoid them knowing the recipe and by 1964, Colonel Sanders had 600 franchises selling his trademark chicken. At this time, he sold his company for $2 million dollars but remained as a spokesperson. In 1976, the Colonel was ranked as the world's second most recognizable celebrity. 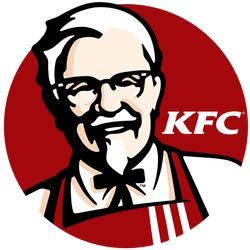 Fast forward to today. KFC is one of the largest fast food franchises in the world. Over the years, the company has been owned by RJ Reynolds (now Reynolds American; NYSE: RAI), Pepsico (NYSE: PEP), and is currently under Yum Brands (NYSE: YUM). Yum Brands family also includes Pizza Hut, Taco Bell, Long John Silvers, and A&W Restaurants. This brand is the largest restaurant operator in the world in terms of units.

It's amazing how the man started at the age of 65, when most retire, and built a global empire out of fried chicken.

I don't know about you but.. I'm hungry! 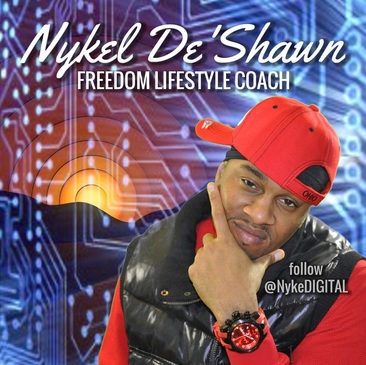